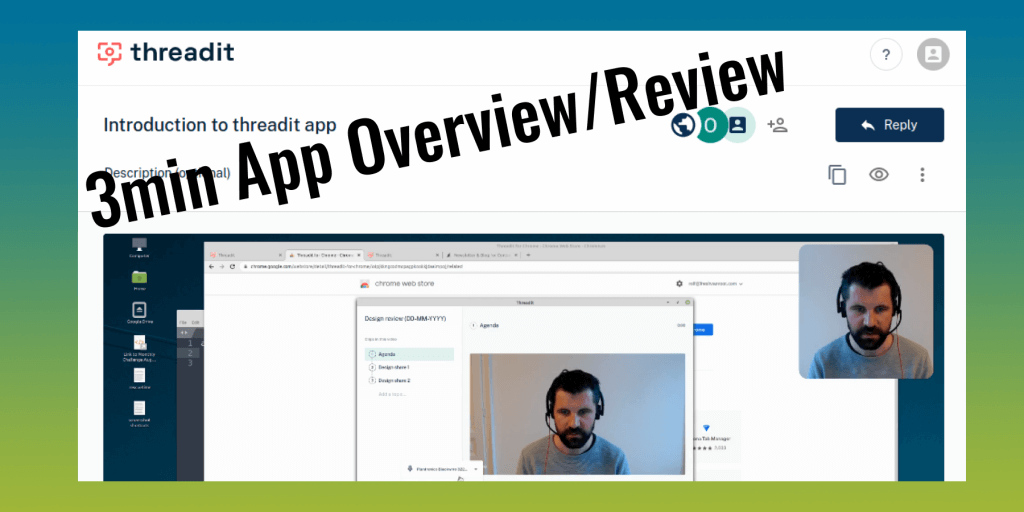 Threadit was discontinued by Google on December 19, 2022. The product never took off and never got largely promoted. I will keep the post below online. I found the idea intriguing, and I think async video messaging is an interesting form of online communication.

The idea is simple: Instead of sending emails back and forth, chatting, creating annotated screenshots, and so on, create a short video that explains it all.

That’s what Threadit app wants to solve. In a nutshell: Asynchronous video communication for your team/organization.

How does it work?

You can record video clips, and combine them in a “thread”. After you are done, you can send around a URL and people can reply.

I recorded a video (3:30min) with Threadit to showcase its features:

To create a thread, simply press the record button. You can record your camera, or your shared screen combined with your camera.

As you guessed from the product name. You can record several videos (clips) and combine them in a thread. think of this like email threads, except that every message is a video clip.

You have several sharing permission settings. This is very similar to other services. Share your threadit conversation only within your organization, with specific people, or with anyone in the world by sharing the link. People within our outside your organization can reply to threads.

You can log in using your Microsoft or Google account. That means it could also be used by teams running on the Microsoft stack (Microsoft Teams for example).

Threadit creates a transcript for your recorded video. That can be useful in several ways if you want to use your recording on other channels later on.

Every Threadit video created can be downloaded. That’s exactly what I did in preparation for this blog post. The video embedded above was recorded in Threadit, downloaded and uploaded to Vimeo.

You can see who viewed your video clips. This is helpful for following up.

Threadit has an option to start with a template. These templates give you an idea of what you can use Threadit for.

Thread it works on your mobile. I replied to a thread from my Android phone using Chrome. Firefox works also (on desktop), but my experience is that it works smoothly on Chrome. There is Chrome extension available, the only benefit of using it is that you do not need to open up the Threadit website to start recording.

Email notifications include an animated GIF that previews the reply. This is a detail I like about the app.

Threadit is for free to use. And that is a highlight if you occasionally record a video that you want to share and don’t want to get on a paid plan for a different service.

Other things to note:

Overall the app is very basic. It’s a new product and definitely not overwhelming from a feature perspective.

The following comes to mind:

It’s meant as a productivity/collaboration tool, not as a tool for content creators to market their Threadit recordings. That is also a main differentiator to tools like Loom.

It’s a cool idea that isn’t new. It smells a lot like other services in this area. Asynchronous communication by video is on the rise as you can save a lot of time. People are fed up with the constant back and forth of messaging, and no one likes to get on a Zoom call and show something via screen sharing if it could have been said via a short video message.

I will definitely follow how the app further develops. It’s coming from Google, and it’s early on, so who knows if the app is still around a year from now.