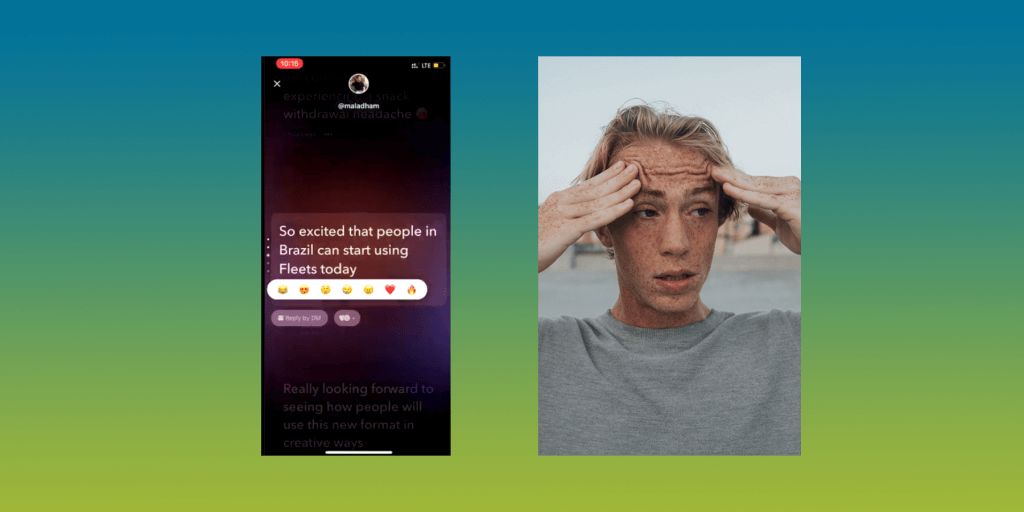 Twitter released a major new feature in Brazil, which could completely change how we use Twitter. It is called Fleets.

Fleets work like Stories on most platforms. A fleet can consist of text with up to 280 characters, with a photo, video or GIF, like in normal Tweets.

The main difference: Fleets disappear after 24 hours. You can’t reply or like Fleets, but send a direct message to the creator. Fleets don’t show up in the “classic” Twitter timeline but live in their own section above the timeline.

The core idea is easy and appealing: Fleets allow people to be more open and spontaneous because they will be gone in a day.

I love Twitter, and I am excited when they try new things, like the new web interface, the ability to hide replies, or pinned lists. But I am doubtful about Fleets. Mostly because I don’t like Stories on other platforms either. But let me explain why I don’t like Fleets.

Disclaimer: Fleets are tested in a single market at the moment, so a lot can change.

Twitter had the major building blocks of Stories already

Twitter camera enabled people to create photos, videos, and live streams. But Tweets created with a Twitter camera showed up in the regular timeline and didn’t disappear after 24 hours. It would have been simple to add a button to Twitter Camera, so users can set them to vanish. With the upcoming Twitter feature that allows you to prevent people from replying to your Tweets, it will be even more similar to how Stories work.

Besides the ability to quickly snap a picture, the consumption of Fleets is a differentiator. Instead of scrolling through a timeline, you swipe through the Story. Which Twitter feature allowed you to flick through a Story? Correct, that was Twitter Moments. Note: Twitter recently changed Moments from horizontal to vertical scrolling.

Twitter Moments is even better suited for storytelling as it allows you to select which Tweets are relevant for the Story carefully. You can include content from other users to make it more compelling. The result is a series of Tweets that people can scroll through.

But creating Twitter Moments is cumbersome and not as simple as creating a Fleet. At least for most users. Power users tend to use off-platform tools to produce their Stories and only upload the final result.

There was another app that had the content creation flow perfected: Vine. Pressing the camera button to record a video segment. You were able to combine as many segments as you wanted to a total of six seconds. Vine was very easy to use and had an exceptionally creative community. Many of them are on TikTok today, and some on Byte.

Twitter could have integrated Vine into the Twitter app and had its unique and easy Story-like feature. But instead, they shut it down. Which was reasonable from Twitter’s perspective. Snapchat and Instagram were more successful, and Vine was hard to integrate into Twitter’s core product.

I argue that Fleets are an even bigger distraction from Twitter’s core product. Enabling a global conversation is at the core of Twitter. Twitter can be used to communicate with friends, but that’s a side effect. Fleets aren’t conversations. Fleets are a separate product from Tweets. They only share the follower network and direct messaging capabilities.

When I open Twitter, it is a real-time stream of interesting and not so interesting stuff from close friends and accounts I want to read. It’s about all the things that are happening right now. Important things bubble back to the top through Retweets. I don’t have to read everything, but I can dive into the stream whenever I want.

With Fleets that changes. With Fleets I have to decide if I want to scroll through the timeline or if I want to watch Fleets (while watching a Fleet I can swipe vertically to get to the next account, horizontally swipe to see the next Fleet of the same account).

Because Fleets disappear within a day, there is an urgency to watch them. But because they disappear, many people will put less effort into them. They aren’t sorted reverse chronologically but by account. It’s like going to each account I follow, who posted something in the last 24 hours and looking through those Tweets. Yikes.

I use Twitter to know what’s happening right now, what moves people at this moment. If Tweets represent a continuing story, people thread them together. Each new Tweet that gets appended pushes the whole story to the top of my feed, and I can open it and scroll through all Tweets if I want. If I find it interesting, I can share it. If I understand it correctly, you can share Fleets as well. But it’s like sharing a link that will expire. I don’t want to do that. I don’t want to force my followers to consume something at this very moment.

But when people spend more time in Fleets than in Tweets, others will fleet instead of tweet, because people use that feature that gives them the highest reach. Not always, but often. Else they could just go back to blogging. More people start using Fleets, and more people watch Fleets because the content they got from Tweets in the past is now in the Fleets. And after 24 hours it’s gone. If Tweets become less interesting, even more people Fleet instead. Until one day, Twitter decides to turn off Tweets and just make Fleets the main timeline. That would be sad, but unlikely. I hope.

Fleets force people to decide to consume Fleets or the timeline and, as a result, change what people use to publish content. In an ideal world, people would use Fleets for bad takes and Tweets for quality content. But I expect quality content to go where the eyeballs are.

With Tweets, we get some statistics, like how many people saw a Tweet, but with Fleets, you can see who exactly saw your Fleet. Nice surveillance tool. More importantly, such specific insights will be seen as more relevant than the general reach of Tweets. It’s another thing that sucks people into fleeting.

Keep it simple and kill Fleets

I am not a fan of self-expiring content. But if I wanted to add it to Twitter, I would integrate it into the current product. A button in the Tweet creation view (instead of the rarely used location button) could allow me to set a Tweet to be self-expiring. It then would show up in the regular timeline and could be consumed like everything else. This doesn’t break the current core product and allows people to tweet as they would fleet.

With the upcoming feature of turning off replies for others, the same functionality of preventing replies could be established. It could be turned on by default when using In-Timeline-Fleets. And Retweets could be disabled as well (as they are already on private accounts). Thanks to threading, multiple Tweets can be combined into one Story.

There is no need to separate the consumption of Tweets and Fleets.

In its current implementation, Fleets will only hurt its core product and confuse users. A better way to implement a unique story-like feature for Twitter would be to use the already existing Twitter Camera and Moments function.

If you want to try out Fleets yourself, connect via a Brazilian VPN and open the Twitter app. There is no guarantee that it will work, but it did for me.