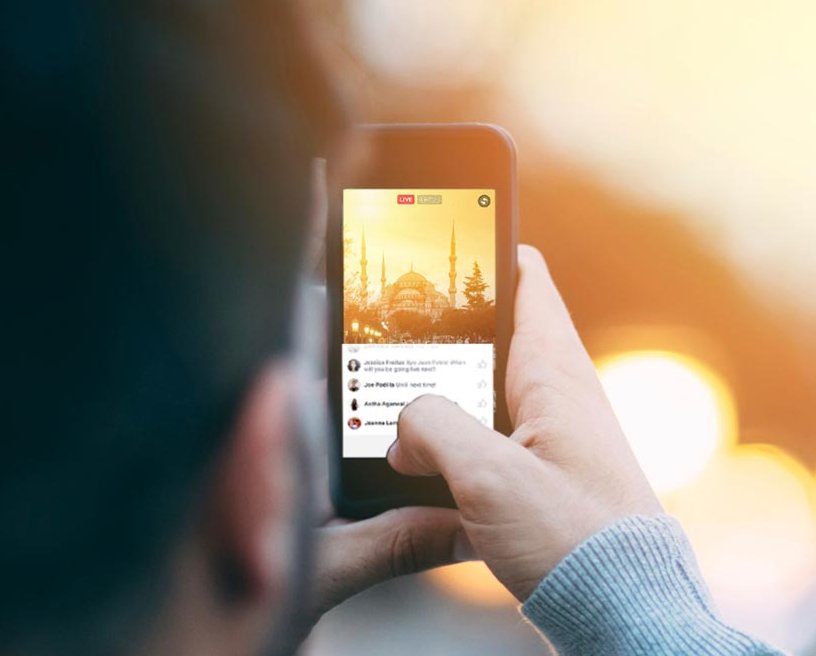 Facebook Live video is still pretty new, and if you have already experience in producing live video events, you should definitely take a look at Facebook Live. In this post we take a look back at how the live streaming started before we dive into details on how to use Facebook Live Video.

Livestreaming isn’t new. The last livestreaming hype happened around 2008. The big players were Ustream and Mogulus. Their innovation was that you could stream directly from your browser. There was no need to install any software or get new hardware, just attach your webcam or use the built in one from your laptop, sign up, and start streaming. They were Adobe Flash based. As people became more interested in livestreams, they longed for better tools to work with multiple camera setups and use other inputs. These semiprofessional needs were fulfilled by proprietary tools of different livestreaming providers and the Flash Media Encoder. It used RTMP, the same protocol also used by the flash tools inside the browser.

Smartphones just started to gain traction. Best smartphone of 2008? The BlackBerry Bold. Google just launched Android with the T-Mobile G1, and Apple brought its second generation of iPhones, the 3G. Even though the hardware and contracts were anything but suitable for mobile livestreaming, some people wanted to do it anyway. The most popular app was Qik. Qik even connected to Mogulus, so you could have multiple people with their smartphones stream to a Mogulus stream and create a kind of sophisticated livestreaming setup, although the video and audio quality were lacking. Another popular app was Bambuser (Bambuser founder was featured here on Fresh van Root in May 2014), which supported most mobile phones and was used by many political activists.

Ustream and Mogulus (renamed to Livestream) are still around but have closed down most of their consumer offerings. They focus on professional use and are priced that way. Qik was bought by Skype and subsequently shut down. Bambuser went the business way as well, but launched a new app called Birdplane for general audiences, but it didn’t get that much traction.

In 2015, the hype machine started again. Meerkat launched on Product Hunt and spread quickly during SXSW. The app for iOS and Android reduced livestreaming to its bare minimum. There wasn’t even a web interface to watch the stream—you had to download the app. You could call it app-to-app livestreaming. Just weeks after Meerkat’s launch, Twitter bought its competitor Periscope before it even launched. After some time, Periscope became the quasi standard for livestreaming on smartphones. In the beginning, Periscope featured the same app-to-app logic, but later made it possible to watch Periscope streams directly in Twitter apps and on the web. To interact with the streamer, you still needed to download the app.

Facebook Live started in 2010. But it wasn’t intended for its users back then. It was intended as a tool used by Facebook itself to stream their events and interviews. It was a cooperation with Livestream.com (Mogulus).

It wasn’t until January 2016 that Facebook launched its own livestreaming tools, but only to selected accounts. Verified, personal accounts (those with a blue checkmark) could livestream through the Mentions app, a special Facebook app, only available to those accounts. A month later, Facebook began to roll out the feature to everyone. Another three months later, at the Facebook developer conference F8, they announced the Facebook Live API, which enabled developers to create third-party tools that stream to Facebook.

What makes Facebook Live unique is its integration into the Facebook platform. In the beginning, people who liked a page received a notification when a livestream started. After many complaints, Facebook added an option to let people subscribe to livestreams of pages and accounts so they wouldn’t get flooded by notifications. Livestreams still get preferred treatment in the newsfeed and are more likely to be shown at the top of the newsfeed of people who follow the page or account. Because of that, it is easier to reach people with Facebook Live than it is with other platforms that you can only link to from your Facebook page.

First, you need to decide where you will publish your livestream. Facebook pages can use specialized tools that can be used with a computer and a more professional setup, while livestreams on profiles and groups are limited to the official mobile apps.

The easiest way to use Facebook Live Video is to use one of Facebooks mobile apps, such as the Pages app for livestreams on pages, Facebook Mentions for verified profiles, the normal Facebook app for personal profiles and groups. This isn’t a rule, just a suggestion. The normal app can be used for pages as well, for example.

This is only available for pages. You will need a computer to set it up. However, it gives you the ability for professional setups, like multiple sources, local mixing, and more.

Take some time to find the right tools for you and test them extensively. There are many tools you could use. At the end of your workflow, there has to be a RTMP stream that you send to Facebook.

The OBS is a great way to start. If you find it lacking, you can still switch to a more expensive solution. Featurewise, the other solutions don’t offer much more but can be easier to use.

It’s not only a classic hardware software solution, even drones can stream to Facebook Live.

Everyone watching the livestream will see the reactions and comments of other viewers. Different from other Facebook posts, livestreams only show a few comments at a time and automatically replace them with new ones. This generates a more dynamic environment but also limits the usefulness of comments for discussion between viewers.

Facebook experiments with ways to mark interesting parts of the stream to help people jump to them while they watch the replay. If there was more interaction at a specific time, this will be shown in the replay.

If you need help in setting up your Facebook Live Video, you can try getting help from Facebook; they have set up a site for this.

Facebook Live video is still pretty new, and if you have already experience in producing live video events, you should definitely take a look at Facebook Live. If not, remember that hosting a live video event is something completely different than producing a video for upload. It needs careful planning and an event or happening that is important enough for people to tune in live. Inviting your followers to join a live event on Facebook and then showing something boring may create dissatisfaction, and your followers might not come back for any live events. As a digital marketer you should definitely invest some time in Live Video to ramp up your skills. With all the efforts from different companies in Live video products, this trend will stick.